Early in 2020, preparations were being made for the Abbey’s new organ due to be in place in 2021. The many pipes will be high up on the north side of  the building and access for this part of the organ being created by making new door.  Scaffolding enabled the building firm, Crofts, to reach the area and they began carefully to chip away at the stone wall at the western end of the high passageway (triforium).

Great care was taken as it was known that 340 years ago the north part (transept) of the Abbey church had collapsed. Churchwardens asked for a special levy to save the tower:

“Parshore, Sanctae Crucis. – The breach in the walls of the abbey church hath been beyond the memory of any man now living in the parish and it cannot be put into better condition except the tower be wholly taken down……but it is agreed that a course shall be taken that the breach may be stayed and prevented from further decay”. “The north side of the church wanteth a pillar to sustain it; otherwise it will fall. The windows want repairing; the great bell fallen out of the tower.”

Despite their efforts, the north transept collapsed in 1680, the hole was walled up, and a buttress built to support the tower. It was in this repaired area that this year, 2020, builders chipped away at the stone wall, and they found – A DOOR – small, blocked up Norman arched door built about 1100 showing damaged pink stone from severe heat – likely to be from the fire in 1223, and over this door a gothic pointed arch, also blocked, from the rebuild in 1239. Both had been hidden away by the repair after the 1680 collapse.

In early March, I was privileged to be taken up the scaffolding to see the progress towards a new access – and climbing up steep ladders, discovered several layers of wall, the inner part of  the Norman door, and the amazing find of a Norman pillar which had once supported an arch in the North transept.

I was not able to return but understand that this area has been repaired, conserved and will be displayed for people to admire in time to come. I look forward to that moment! 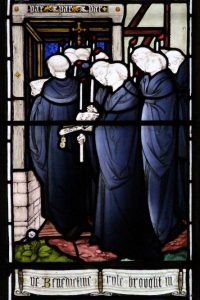 ‘The Benedictine rule brought in’ A.D 972, There had been hitherto a college of secular priests. The strict Order of St Benedict was now spreading through western Europe, and the black monks came here 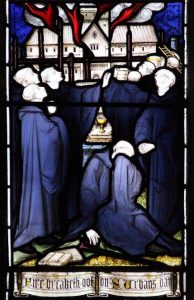 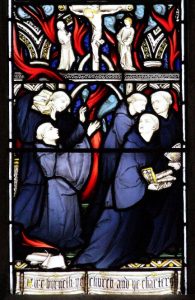 ‘Fire burneth the Church and the Charters’ A.D.1288    A disastrous fire, of which the traces are visible in the church, destroyed many houses in the town. A Royal Commission was issued to replace the deeds that were destroyed. 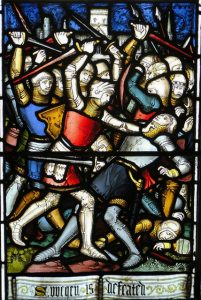 ‘Svegan is Defeated’ In the year 1013 there was an invasion of Danes, who after sacking Winchester and Oxford, came to Pershore, and were defeated here by the townspeople commanded by one ‘Harley’ 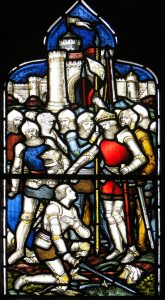 ‘Harley is made knight in Jerusalem’ A descendent of the Conqueror of Sweyne joined the first Crusade, and was Knighted by Godfrey de Bouillon. His effigy is in the Church. 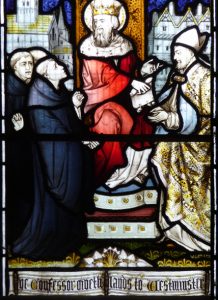 ‘The Confessor giveth lands to Westminster’ A large proportion of the possessions of the Monastery were alienated by King Edward the Confessor and given to his own foundation of St Peter’s, Westminster. He built St Andrew’s Church for the Westminster tenants of the town. The Dean and Chapter are still patrons of the living. 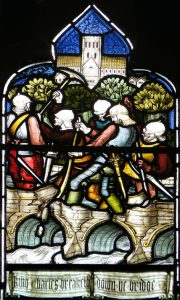 ‘King Charles breaketh down the Bridge’ The army of the Parliament was at Broadway, and the King was retreating upon Worcester. The Bridge was broken down to protect his rear, and forty men were drowned, June 5th, 1644.

This website uses cookies to improve your experience while you navigate through the website. Out of these, the cookies that are categorized as necessary are stored on your browser as they are essential for the working of basic functionalities of the website. We also use third-party cookies that help us analyze and understand how you use this website. These cookies will be stored in your browser only with your consent. You also have the option to opt-out of these cookies. But opting out of some of these cookies may affect your browsing experience.
Necessary Always Enabled
Necessary cookies are absolutely essential for the website to function properly. These cookies ensure basic functionalities and security features of the website, anonymously.
Functional
Functional cookies help to perform certain functionalities like sharing the content of the website on social media platforms, collect feedbacks, and other third-party features.
Performance
Performance cookies are used to understand and analyze the key performance indexes of the website which helps in delivering a better user experience for the visitors.
Analytics
Analytical cookies are used to understand how visitors interact with the website. These cookies help provide information on metrics the number of visitors, bounce rate, traffic source, etc.
Advertisement
Advertisement cookies are used to provide visitors with relevant ads and marketing campaigns. These cookies track visitors across websites and collect information to provide customized ads.
Others
Other uncategorized cookies are those that are being analyzed and have not been classified into a category as yet.
SAVE & ACCEPT
Powered by