The second part of the walk around Pershore

back to first part of tour

Whilst traversing the High Street, Inspect the fine doorway of No.37 High Street, formerly the home of the Wilson family who were tanners until 1835. The tannery works behind the house have been excavated and the plans are displayed at the Heritage Centre in the Town Hall just across the road. Proceeding south down the High Street you can find St. Michael’s undercroft or crypt in No.21 giving a possible indication of a mediaeval manor. In The Courtyard to the rear of 19 High Street, can be seen one of the wool barns of the Ganderton family which has now been converted into a shop and workrooms. Wool stapling was an important trade in the town in the 19th century, and the family lived in a fine Georgian house on the front.

A few more steps will bring you to the elegant façade of the Angel Inn of Tudor origin, the lane at the side once called Quay Street leading to the river Avon. The architectural delights of Bridge Street (once known as Mill Street) are best enjoyed by strolling down towards the river bridges at the approach to the town. Apart from the collective streetscape there are individual houses of importance and innumerable details of great interest. No.1 Bridge Street was another Ganderton home adjacent to which is a large town house previously occupied by Barclays Bank having a particularly interesting front door with a late 18th century fanlight of unusual design of interlocking circular ornaments.

After passing Bedford House with its decorative balcony we come to Perrott House built about 1770 by Judge Perrott. Retiring to Pershore, he restored the weirs and locks of the Avon navigation, thus laying the foundation of the town’s prosperity in the late 18th century.

Beyond Perrott House you will come to the Star Inn formerly a posting house previously named the Coach and Horses. Next door is what was the Brandy Cask pub, formerly named the Liquor Vaults and originally a wool warehouse. It has recently been converted into residential apartments and renamed The Cooperage.
Nos. 37-43 Bridge Street originated as the Maidenhead Inn and a landing place for the barge trade.

Further down and across the road is another distinguished residence, Stanhope House, built about 1790 by another George Perrott, nephew of the judge. At what was the Manor House Hotel (an early Victorian building now converted into apartments) the town finishes abruptly owing to the river meadows which often flood.

On the other side of the road is Avon Mill, a development created from the old Saxon Mill destroyed by fire in the 1970s. The old mill house a Georgian building occupying a site mentioned in the Domesday Book fronts Bridge Street and was once used as a Quaker Meeting House and is now part of the new development. On to the old bridge which is mediaeval, though often repaired and altered in later times. Note the different stone which was used to repair the centre arch, a reminder of its attempted destruction in 1644 by King Charles 1’s army retreating to Worcester Returning towards the town, a Victorian toll house can be seen on the left (bearing a Civic Society plaque) and just behind it a path follows a serpentine brick wall, one of a number of examples in Pershore of this unusual feature. 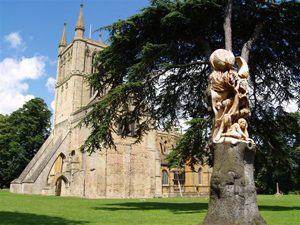 Tree sculpture in Pershore Abbey park made by Tom 'Carver' Harvey using a chainsaw in 2007. 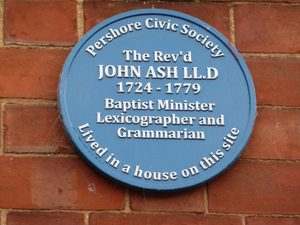