Diary Days – Records of the Past Events held by PCS

A keen group of Civic Society members thoroughly enjoyed their visit to Walcot Nursery on a warm, windless October evening. Kevin’s business took shape 20 years ago when he first purchased a nearby field. It has since expanded to 15 acres, produces between 18,000 and 20,000 organic fruit trees each year and employs three people.
They use crop rotation for sustainability and they propagate using a bud system rather than a graft. Kevin demonstrated how the bud is chosen and then bound tightly onto its host. The budding work is undertaken in the summer with a 90% success rate. The trees lie dormant during the winter and then grow vigorously in May and June. They are sold during the winter months as bare root trees (not in plant pots), arriving with the purchaser within 24 hours of being lifted out of the ground. The trees can be developed into bush trees, or espaliers or cordons because they are versatile at such a young age and can be grown to whatever type the customer requires.
The nursery usually sells all the trees it can grow. They are one of only three organic fruit nurseries in the country. They grow over 50 varieties of apples and 30 varieties of plums and pears. Some are rare and unusual varieties such as the Pitmaston Pineapple (apple) and the Christmas Pippin (apple). Members relished sampling the apples at the end of the tour!
Whilst the nursery is of course pesticide free, they spray with soapy liquids towards the end of winter to deter aphids. Deterring the local deer is another matter and the staff have tried all sorts of ingenious methods as the deer love to graze on the new trees! 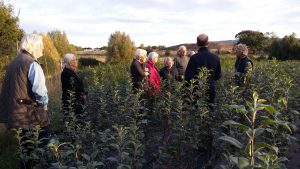 Talk via Zoom -David Clark and We Can’t Let You Broadcast That!- October 2021 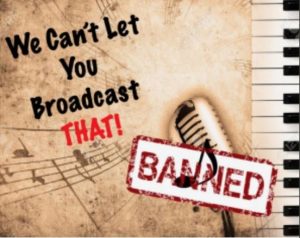 David Clark was born and raised in London returning to the UK in 1970 after working in Germany and Australia to live in Worcestershire where he is now retired.
After a varied career he ended up working for Age Concern and was also a city councillor for 20 years serving as Mayor of Worcester.
He gave a fascinating insight into the rules governing BBC radio protocol prevalent until about 20 years ago and some of the strange items especially relating to music that were banned by Auntie BEEB after John Reith (a Presbyterian ministers son who loved the classics) was appointed Director General of the BBC in 1927.
Many recordings dating back prewar were banned it appears on the lamest of excuses such as Bing Crosby singing Deep in the Heart of Texas which included some clapping which could apparently, disrupt the production of war armaments in factories playing the music! Likewise much was banned during the Gulf War and the Falklands including Abba’s version of Waterloo -site of a Franco/Anglo war!
Ella Fitzgerald’s recording of Bewitched, Bothered and Bewildered was also banned as bewitched could relate to darker elements.
The plus side for artists was that the sales of records were at an all time high as no-one
could listen to them on the radio without switching to one of the European stations such as Radio Luxembourg. 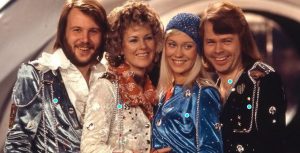 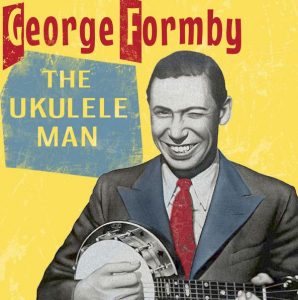 There was an air of excited anticipation as members of the Civic Society set off towards Gloucestershire on a bright and sunny Autumn morning. This was our first outing for nearly two years – Covid 19 having caused postponement of all visits in 2020 and in most of 2021 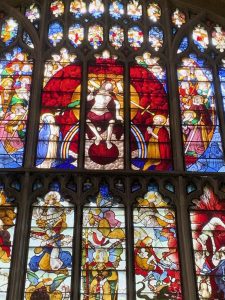 Our Guide Tim Bridges explained, during the journey towards Cirencester, the existence of Cotswold limestone surfacing millions of years ago as an escarpment, its colour varying in geographical areas with the resulting landscape of rivers, grassland, trees and stone, and sheep grazing peacefully as we drove by. 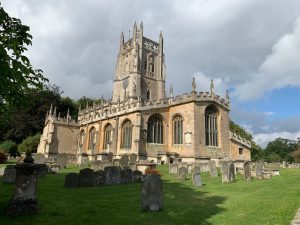 Our first Cotswold church, St Mary’s in Fairford, (consecrated in 1497) is rich in mediaeval glass, C1500, every window displaying biblical figures telling the story from Adam and Eve to Christ’s Ascension, the most striking being the Great West Window, ‘Justice and Mercy’. 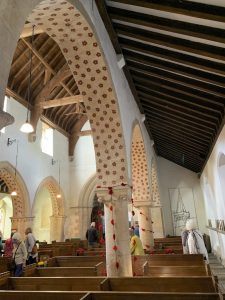 After refreshment we proceeded to All Saints, Down Ampney, a church built by the Knights Templar and consecrated in 1265 – the village was the birthplace of composer Ralph Vaughan Williams whose music to ‘Come Down O Love Divine’ is Down Ampney. 13th century painted red flowers on the underside of the arches, and more recent knitted red flowers were wrapped around the ancient carved woodwork inside the church, apparently symbolic of the Black Death, the plague of long ago, which caused a skin rash – ‘Ring a Ring o’ Roses’. Of the windows in this church, one is a memorial to the battle of Arnhem, 18th September 1944, the RAF flying many troops and dropping them on Arnhem. 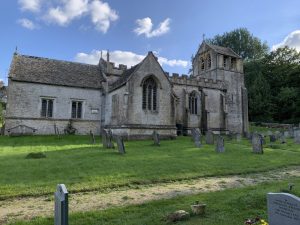 Our last church in North Cerney, also called All Saints, once Saxon, then Norman – but badly damaged by fire around 1460 and afterwards heavily restored. We saw wonderful old oak furniture and very fine doors. Again, striking mediaeval glass, and 18th century monuments.
Our thanks to Susan Ellis for her excellent planning, and to Tim Bridges who shared so much of his knowledge.

On Wednesday July 21 st members of Pershore Civic made their visit to Malvern, some two years after our invitation from the Malvern Civic Society, the visit having had to be postponed due to the pandemic. We were welcomed by Malvern’s Chairman Andrew Huntley and after introductions we were taken in two groups on a guided tour of the town. The sun was shining and there were feelings of excited relief – the legal Covid restrictions had been lifted only two days before.

And what gems we were to discover! After a short but steep walk uphill, at our first stop we looked over the houses of Malvern, beyond the Severn valley to the Lenches near Pershore. 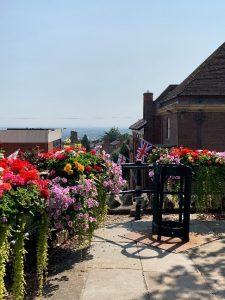 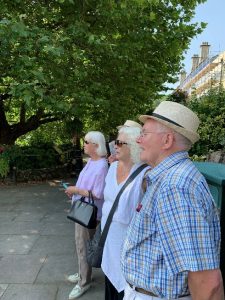 We learned that Malvern was first a resting place for travellers and their horses as they crossed these hills, only a small village until 1842 when the ‘Water Cure’ was introduced by Drs Wilson and Gully. Pure water therapy being the cure for the results of extravagant living in London, Malvern prospered!

Thousands flocked to Malvern ‘to take the waters’ resulting in rapid growth of the town. Malvern water was used by Queen Victoria and continues to be supplied to Royalty today. 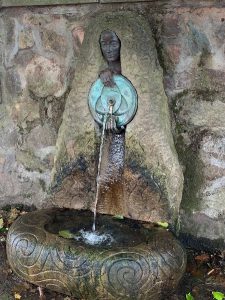 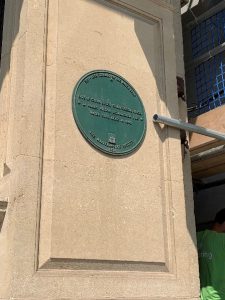 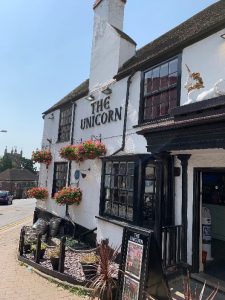 Continuing our tour we were shown one of the few very old buildings – The Unicorn Inn for travellers and their horses – stage coaches with sometimes 8 horses which would be rested at this hostelry. One of its guests was CS Lewis, and the Malvern Civic Society have marked his visit with a blue plaque. Malvern features in “The Lion the Witch and the Wardrobe”.

Our guided tour took us past beautiful buildings, shops and hotels, and interesting steep paths used by donkeys to carry shopping items purchased by ladies as their husbands took the cure! We were also shown a rare Victorian letter box, one of only 4 in England, three being in Malvern – its design a fluted Doric column, and VR clearly visible 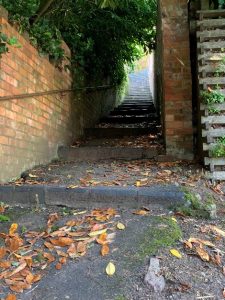 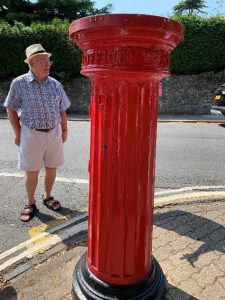 We also visited Malvern Priory, a monastic church built in 1085, with mediaeval stained glass windows. The Priory historically has connections with Pershore Abbey and Westminster – but that’s another story.
We had a wonderful day. Our thanks to Malvern Civic Society

Keith Goddard presented a fascinating selection of photos of life on the River Avon during the last century including a picture of the original Watergate which was demolished during the 1950s in order to facilitate better navigation of the river and construction of the various locks. 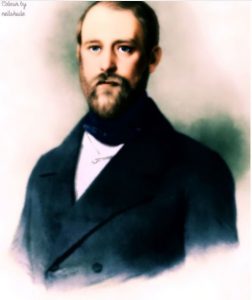 Pershore Civic Society met together via Zoom on the evening of 2nd February 2021 to receive an informative and highly entertaining presentation from Chris Bristow, Civic Society Treasurer on the topic of “Otto Edouard Leopold von Bismarck 1815-1898“.

The presentation focussed on Bismarck’s role in the unification of modern Germany in 1871 from a diverse collection of states and principalities. Arguably, his achievements continue to have an impact on life today in Germany, the EU and beyond.
We are all looking forward with anticipation towards the publishing of the book about Bismarck that Chris is in the process of writing – maybe 2022 Christmas present?
Copies of Chris’ slides are available upon request as a digital download – as is a video of the entire meeting.
Please contact Chris Bristow if you would like to receive the slides or video.
Chris Bristow
cdbristow51@gmail.com

As most events planned for this winter have had to be postponed, we were lucky to be able to have our first Zoom presentation by local artist David Birtwhistle who in this Part 1 showed a collection of his iconic paintings of many local scenes including Broad Street here in Pershore.

He pointed out that he could always be found in one of his scenes either the man in red in the distance or possibly a cat or even a dog! 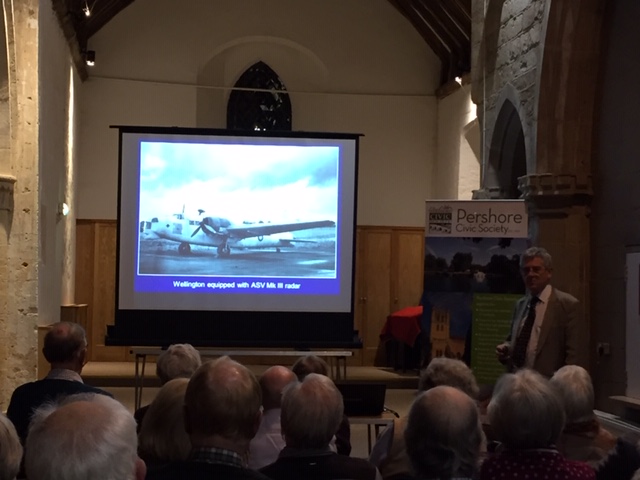 A fascinating talk presented by Dennis Williams covering the years when both Defford and Pershore (known locally as Throckmorton) airfields were used by the Royal Radar Establishment for flight trials. Both having ceased operations by 1981. 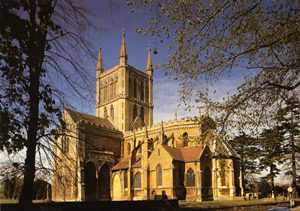