Michael proved to be a charismatic and knowledgeable member of the NT whose enthusiasm for the Croome project was much in evidence. He gave a history of the Croome lands after the Norman invasion when it was controlled by Urse d’Abitot the first Norman sheriff of Worcester.
The sixth Earl of Coventry inherited appr 15,000 acres in 1751 and although known as being of very poor quality the land was also known as ‘soggy’, hence the draining of the land into the river and ornamental lake after Capability Brown was commissioned in 1750 to landscape the grounds and refurbish the originally red brick house.

Silt from lake and river being redistributed on adjacent meadows

Meadows 1 year on from silt being spread

Croome Court (grade 1 listed) is now a Bathstone Palladian mansion incorporating substantial arts of the previous C17 mansion, the interior including work by Brown, Robert Adam, G. Vassalli and J. Rose jnr.
C20 saw a decline in the estate and in 1948 it was sold in various parcels to a succession of owners including the Archdiocese of Birmingham who ran a boys boarding school in the court until 1979. It was then sold to the Hari Krishna who occupied the court until 1984.
In October 2007 Croome Court after suffering years of neglect, was bought by the Croome Heritage Trust who took the property on in partnership with the National Trust which undertook to run and repair it after obtaining Heritage Lottery funding. The house opened to the public on 26 September 2009 after being made safe and the Trust have now extended the lease to the NT for 999 years.
The adjacent Red Wing is currently the subject of major repairs and refurbishment and it is hoped to be able to view the site some time next year.

Michael gave much more information including the sale of furniture and artefacts – some of which is on show in the Metropolitan Museum in New York and some in the V & A in London, together with news of future events and exhibitions not to be missed!

Opening of Chinese bridge by a dragon dancer

Visit to the Museum of Carpets in Kidderminster - September 11th 2019 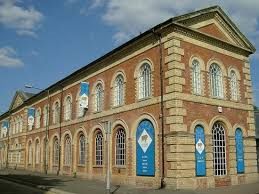 Once a thriving carpet factory, the Stour Vale Mill is now home to the only Carpet Museum in the country and has four galleries that illustrate the history of design and industry in Kidderminster.
11th September saw a visit to the museum which is now housed in what was the very first factory built for making carpets in 1855 and is now owned by Morrisons who only charge a peppercorn rent.
Lottery funding provided £2m for setting up of the museum building which opened in 2012, the looms being donated, and Lord Cobham is patron.
Originally work was undertaken in weavers cottages with fleeces prepared downstairs by the children and mother of the family and weaving upstairs by the father.
Different kinds of wool used in the carpet making together with flax and silk were shown, together with spinning and which is where the word ‘spinster’ originated.
The use of looms was then demonstrated beginning with the hand operated loom of 120 years ago used with the flying shuttle.
The different types of carpet were explained; Wilton being the superior, followed by Axminster and the original Kidderminster a double sided simple rug.
More sayings originating from the industry:
tenterhooks, spinning a yarn, shuttle, sweep under the carpet and dyed in the wool.

This visit led by Tim Bridges, Conservation Adviser for the Victorian Society, looked at some of the less familiar, discovering Birmingham’s hidden suburbs, houses, church and industrial buildings in the city of a thousand trades, enjoying architecture and design from the Victorian Arts and Crafts Movement.

First stop was the parish church of St. Augustine of Hippo in Edgbaston named obviously, after St. Augustine who a Berber by birth in North Africa became a lawyer and converted to Christianity in 367 in Milan. Ordained a priest and returned to North Africa to become bishop of the small city of Hippo.
A beautifully maintained church on a small green surrounded by examples of the Victorian Art & Craft movement houses, the architect of the church being Julius Chatwin who became chief architect in the C19 for Birmingham City Council. In 1868 the church was consecrated by the Bishop of Worcester having won a design competition, the construction cost of which was £9,000, a 185ft tall steeple being added in 1876 at a cost of £4,000. Inside the church is a striking painted chancel ceiling, stained glass and a wealth of stone carving, much of it done by the Bromsgrove Guild. We were offered coffee and delicious homemade cakes to sustain us on our next tour by coach through Edgbaston. This enabled us to see over hedges and walls and admire the leafy suburbs and Regency/Victorian style buildings many of which are listed.

On through Selly Oak, Bournville Village , Stirchley and into Moseley Village to admire the houses in Amesbury Road and the St. Agnes Conservation Area. Then along Wake Green Road the base for the setting of Tolkiens Hobbit. Much of this area was part of Worcestershire until the early C20th. On past Moseley Baths being the last Edwardian baths still in use in the country for which it is hoped funding can be found to have this amazing building restored. 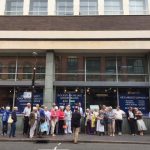 On to Highgate to visit St. Albans Church close to where several mosques and high rise flats could be seen on the horizon.

The church was consecrated in 1899 again by the Bishop of Worcester, built mainly of red brick but with Bath stone pillars now discoloured by heating and lighting and incense fumes. A delicious lunch was served before we continued the tour around the Jewellery Quarter admiring many of the Georgian houses which had been converted into workshops and the Ramgarhia Sikh Temple once an Independent chapel.

We wended our way through Lozells and around Handsworth to the Handsworth Cemetery Chapel adjacent to a very large cemetery, where our coach successfully dodged a multitude of cars. The chapel was built in 1908 by Handworth Urban Council who allegedly blew their remaining funds on the building before being absorbed by Birmingham City Council.

On to Anchorage House in Handsworth Wood sadly currently up for sale after being the home for some years of a community charity. A wander around the garden gave us a chance to chat with 4 ducks and admire the building after being served more tea and cakes.

An illuminating trip even for those of us who thought we knew Birmingham well! 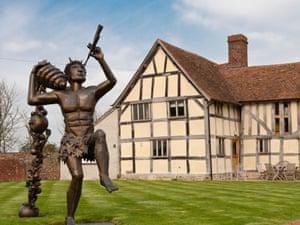 A statue of Pan welcomed us to Eckington Manor, which is secreted away in a corner of its namesake village just across the River Avon. The steel figure, by Paul Richardson, is wielding a horn and a cornucopia brimming over with ripe fruits and vegetables. It’s fitting, because Eckington Manor houses a thriving restaurant and cookery school, as well as a 15-room hotel carved out of an old farm estate. All the wings of Eckington Manor are rescued farm buildings (five of them make up the hotel altogether) including the 17th-century half-timbered Lower End House, which everyone can use for the lounge and bar. A third building, with more guest bedrooms, is the former milking parlour. We were welcomed by Judy Gardner, Jane (otherwise known as right hand man) and other members of her close team with coffee and delicious biscuits – homemade obviously! Judy gave us a not so brief history of her commercial life starting with taking a stall in Pershore Market where she marketed her pickles and chutneys so successfully that she eventually sold out to Baxters and retired – for a very short time! What is now Belle House in Bridge Street came on the market and coming out of retirement was bought by Judy who founded Belle House Restaurant. After selling the lease to Steve Waites she retired for the second time buying Eckington Manor for her own use. After purchasing what was Jacksons Farm consisting of 200 acres in 2004 and coming out of retirement for the third time to create Eckington Manor Cookery School, restaurant, pedigree cattle farm and hotel she is still very much involved with the complementary businesses. Mark Stinchcombe her award winning chef has now moved on to be replaced by Mehdi Amiri. The group were then taken on a tour of the complex stopping to admire the Grain Barn which can be used for events, weddings etc and has 2 large rabbits decorating the walls – not dead ones but created from stuffed hessian sacks – change from flying ducks!
Morton Hall Gardens - May 14th 2019
14th May dawned bright and warm for the visit to Morton Hall Gardens where we were met by Harry Green, the Head Gardener who gave a brief history of the house and site followed by a tour of the garden. This began with the meadow, covered in various wild flowers and two recently introduced varieties of Camassia together with trees planted to flower at different times of the year. On to the Japanese garden with its tea house and wonderful woodland rockery. After walking round the pond and following the winding watercourse above, we emerged to see below a listed Chestnut tree. An arched gateway took us to the Kitchen Garden planted ornamentally but purposefully to provide not only vegetables but also fruit from the glasshouses. The tour concluded in the West Garden planted to enhance the spectacular view over the Worcestershire countryside, followed by a delicious cream tea in the Garden Café.

Olives, Elephants and Explosives- April 2nd 2019
A meander along the Avon from Wyre to Pensham with Keith Goddard. Chairman introduced the meeting by pointing out the Saxon sculpture now revealed on the back wall in St. Andrews Hall previously hidden by the piano. One of life’s mysteries as no-one knows what or from where but is estimated to be over 1,000 years old. Keith presented a collection of photographs illustrating life as it was on and along the Avon starting with Osier and Tiddle Widdle Island opposite the Anchor Inn in Wyre Piddle. 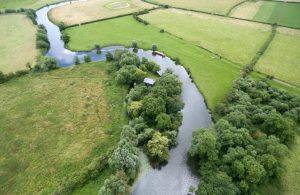 There was also a ferry that operated taking customers from Wick with no pub to the Anchor in Wyre. Renovations to the locks in Pershore were illustrated with clips of Pisgah the boat used for carrying grain to Pershore Mill from Gloucester before road transport took off. Pisgah is a peak in the Mount of Olives from where Moses saw the Holy Land. The boat was sold in 1922 and is now a houseboat based in France. 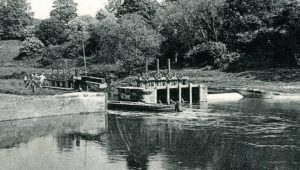 Views were shown of Weir Meadows where the circus paid an annual visit with elephants being taken across the road for a swim in the shallower waters. Clips were shown of the coal wharf serving Wick and Pensham together with the Watergate which was destroyed with explosives by the Royal Engineers at the request of LANT although the blast was apparently larger than expected. The remaining stonework can often be seen amongst the reeds adjacent to what was once Sanders Boat Hire. Fascinating meander along the Avon. 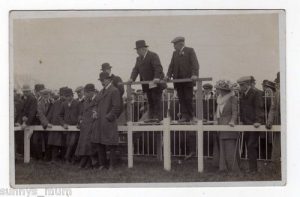 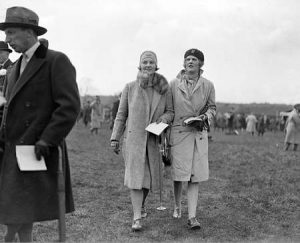 A fascinating evening showing postcards and photos of Pershore’s past including many of the old racecourse situated opposite Defford Road which opened in 1899 moving behind what is now the High School in 1934. One photo featured “Bruiser” Woods the official race starter in 1929 and grandfather to the current president of Pershore Civic Society John Alexander. There will be another opportunity to view some of these photos and other memorabilia at the Photo Day in St. Andrews on Saturday 29th June 10.30 – 1.30pm when all will be welcome.