The History of Worcestershire Archaeological Society with a Pershore Twist - October 9th 2018
The History of Worcestershire Archaeological Society with a Pershore Twist by Robin Whittaker Drawing on his years of being the archivist to the Worcestershire Records Office, now held in The Hive, Robin gave an insight into the founding of the Worcestershire Archaeological Society. This Society, the main historical society for the county, was founded by Sir Edmund Lechmere and friends in 1854, part of a nationwide resurgence of interest in history. Initially the Society had a marked ecclesiastical bias, with the then vicar of Pershore being a founding Committee member, and the mid-century renovations at the Abbey being favourably reported on in the Society’s publications. Later the Society extended its fields of interest to cover the wider history, archaeology and architecture of the county and Diocese of Worcester. Key early members included J. Willis Bund and John Noake, who both published and lectured widely. In the twentieth century members included Sir Edward Elgar and Stanley Baldwin. The Society has not been afraid to speak out on major heritage issues such as the demolition of the Guesten Hall at Worcester Cathedral, the Lich Gate development in Worcester in the 1960s and the Crowngate development of the 1890s. It publishes a biennial Transactions volume which has included significant article on Pershore. The Society continues to offer a series of winter lectures and summer excursions for its members.
Visit to Worcester Cathedral Library - September 20th 2018 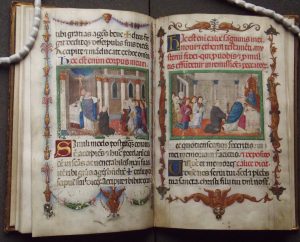 The visit started well with coffee and cakes provided by the Cathedral and meeting the librarian Dr. David Morrison, before entering the Library which houses the second largest collection of mediaeval manuscripts in any cathedral in the UK including music ranging from mediaeval to Elgar, documents used by academic researchers, ancient artefacts and even some relics of King John.
The group was shown a veritable feast of manuscripts laboriously created with inks made from iron and oak gall and written on stretched and dried animal skins, the oldest and most delicate of which was calfskin. Scribes used pens made from bird feathers such as goose and robin, depending on the size of the script required. Documents were decorated with colourful illuminations of bright reds, blues and even gold. The treasured Worcester Anthiphoner was also shown which is a liturgical service manuscript from around 1230 and hidden during the reformation, and still occasionally sung today by the men of the Cathedral Choir.

Photos of Pershore Old & New - June 30th 2018
Another fascinating morning with maps and photos past and present placed around the main hall in St. Andrews. In addition Roger Smith brought his collection of postcards and photos acquired over the years and Chris Ludlow brought his laptop showing photos taken and acquired of family, friends and events over the decades. Many people attended this now annual event, for the first time, including newcomers to the town. A very successful and enjoyable morning.

On 4th July Duncan Cadbury led 16 members of Pershore Civic Society on a visit to the Bournville Village Trust founded by George Cadbury in1900. Today the village covers 1,000 acres situated in south west Birmingham and includes around 8,000 mixed tenure houses providing accommodation for about 25,000 people.

Rowheath Pavillion situated in a parkland setting with extensive playing fields had a tea dance in progress although no-one had time to join in! Next on the list was

The Quadrangle consisting of 33 almshouses built in 1898 for retired Cadbury employees providing a quiet oasis off a busy street.

The group were then shown around Selly Manor Museum a 14th century manor house which houses the Laurence Cadbury collection of period furniture. George Cadbury, his father, bought the building in 1907 arranging for it to be moved from Selly Oak to Bournville where it stands today. 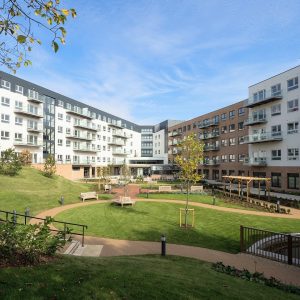 One of the highlights was a visit to the Serbian Church, built 50 years ago to serve Serbian people living in the Midlands which is beautifully decorated and where the priest sang for us after giving a talk about its history.

Another highlight of this fascinating day was Bournville Gardens which is an extra care scheme of 212 apartments for older residents. It has state of the art facilities and an amazing design allowing lots of light and space and where every interest seems to be catered for.

A visit to Elgar’s birthplace “the Firs” in Lower Broadheath started well with lunch in the courtyard of the property which has been operated since last year by the National Trust.

A tour of the gardens revealed a statue of Elgar gazing out over the Malverns in the distance together with a fresco of him on his much loved bicycle.

A short video detailing the families history was viewed followed by a guided tour of the cottage of Elgar’s birth by very informative guides. Elgar was born in the cottage in 1857 the only one of 7 siblings born there and where he lived for the next 2 years before the family moved to No. 10 High Street,Worcester where his father opened his music shop.

Elgar eventually became a piano tuner and was able to display the royal seal of approval from the Dowager Queen Adelaide living then in Great Witley Court.

Robin and Peter with Elgar

CS lunch prior to tour

Elgar was known for his love of nature, riding his bike and flying a kite whereas writing music was seen as a chore. He wrote the scores with a fountain pen as they were never altered the music already composed in his brain ready for documentation. International fame came his way after he wrote the Enigma Variations in 1899, although his wife Caroline Roberts was always convinced of his talent. She acted as his business manager and social secretary, dealt with his mood swings and was a ‘perceptive musical critic’.

Elgar was awarded a baronetcy in 1931 choosing the title Sir Edward Elgar 1st Baronet of Broadheath – after the village where he was born. 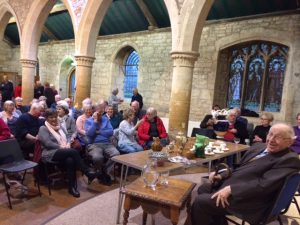 An entertaining and educational evening with Henry Sandon who identified and valued several items produced by members of the audience including a twin handled C19 vase, a late C19 Dresden vase featuring a street scene and a female Toby Jug by Martha Gunn who used to assist ladies bathing in Regency days in Brighton who were “taking the water”. Henry brought a photo of himself valuing Ozzy the Owl at an Antiques Road Show in Northampton carried in a plastic carrier bag before being valued at £20,000 and later sold for £22,000 now residing in the Potteries Museum in Stoke on Trent.
He then invited all present to the re-opening of the revamped Worcester Porcelain Museum on 30th June 11am.
At the end of the evening he was presented with bread pudding by one of his most avid fans who has clocked up 220 road show visits and a box of cheese from the Civic Society.
Mustn’t forget to help him celebrate his 90th birthday on 2nd August! 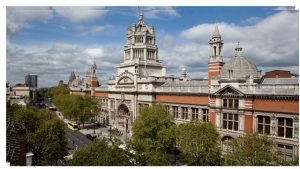 Even with such a busy life he managed to find a ‘cosy’ home in Worcestershire namely Wolverton Hall where with his wife he raised a family of 4 sons and where he attempts to spend as many weekends as possible his favourite place being the garden where he writes the odd novel or 2 in longhand, only fitting for a descendant of the brother of poet Samuel Taylor Coleridge.