A fascinating talk was given by Clive Mathews Chief Executive of the Avon Navigation Trust on some of the recent history of the trust and the River Avon.
A slide show was given detailing some of the disasters and successes of navigation on the river including the now infamous 2007 flooding and the recent damage done to Bidford Bridge by a tractor almost going through the wall detailing ANT’s role in the rebuilding.
ANT is now professionally run with the aid of many regular volunteers and it is the first time that the River Avon has been run under one authority since 1717.
Clive reported that Jack Hegarty MD and Chief Executive of Wychavon & Malvern Hills District Councils has just been appointed Chairman of the Board of ANT trustees and that the future is looking bright.
How the Pershore Plum won the Great War - 4th October 2016

An enthusiastic group of people arrived to learn more about how troops were sustained with the aid of plum jam during WW1. A visitor from Stratford had called in after seeing the talk advertised in the Heritage Centre and presented a poem written by his 7 year old daughter Georgia Milton:
How did the plum win WW1
It fed the troops made into jam
Who ate it in the trenches with their spam.

A fascinating evening with photos of not only some of the troops but also their families left behind in Pershore, together with copies of some heart rending letters.
The arrival locally of Belgian refugees and eventually German prisoners of war helped with the essential harvesting of crops, although the main burden fell on what became the Womens Land Army. Prior to the war 60% of food was imported which was obviously affected when submarines effectively stopped the convoys.

Also mentioned was the formation in 1916 of Pershore WI providing women with practical help, friendship and support during some of the darkest times in Britain’s history.
Many thanks go to Prof. Maggie Andrews and historian Jenni Waugh who gave the presentation after doing research with the assistance of Worcester Uni students and local groups.

We were welcomed in the foyer of The Other Place by our guides Jack and Tricia and taken to the first level of the building where the purpose and ethos of the Royal Shakespeare Company and buildings was explained and in particular the structure of the building, which could be seen together with views of the rehearsal rooms below.

Following this we travelled by lift to the next level where there was the ability for the actors to practise being suspended above stage as were were now on the third floor, the suspension attachment matching the ceiling height. 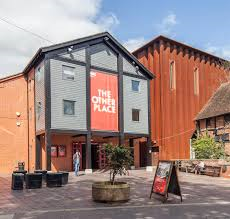 On this floor we proceeded to the stage area of The Other Place and sat on balcony seats overlooking the stage and it was explained that further seating which was retracted could be brought forward in front and below us to provide more seating whilst giving flexibility for using most of the floor space when the seats were retracted.

Jack told us in detail how the plays were planned, scenery constructed and/or mimicked for rehearsal purposes and the director and cast chosen. Generally there was a four month lead time for each play in rehearsal.

After this, we were taken into the costume store and saw hundreds of costumes and accessories which are now housed in this one place, having previously been scattered across Stratford and now stored in avenues reflecting the different eras chronologically.

Jack and Tricia returned us to the first floor level where delicious pastries and coffee awaited us.

Members and friends assembled in the new Welcome Centre for a visit to Spetchley Park Gardens and from where the wind turbine could be seen across the fields working well in the breeze. We were introduced to David Pollitt volunteer gardener and guide who gave us background history to the house and gardens which are in the process of being overhauled and improved with the aid of Heritage lottery funding..read more
WestMASA meeting held in St. Andrews Hall - 9th July 2016

This was the first time a WestMASA (West Midland Amenity Societies Association) meeting has been held in Pershore and to which Pershore Civic Society members were invited. Representatives were present from as far afield as: Sutton Coldfield, Bewdley, Atherstone, Malvern, Droitwch and Harbury.

Our Chairman Judy Dale welcomed all visitors and following the official meeting a presentation was given by Keith Goddard on the history of the formation of Pershore’s Number 8 Theatre and Arts Centre. This was followed by a members discussion covering possible updating of listed buildings both internal and external, together with the national compilation of war memorials.

After lunch in the White Horse Judy Dale had organized a guided tour around Pershore Abbey and for those fit enough, a trip up the tower. Two of the WestMASA visitors Jacob Rock and Louisa Davidson were given a whistlestop tour of the town and invited to return for a more relaxed trip sometime in the future.

Our first stop on the Herefordshire Black and White Village Trail was at the lovely medieval town of Leominster. A popular destination there was the Old Merchant’s House in the corner of Corn Square, now a café and Antiques centre. This was the first of the many timber framed buildings on our route. The framework of building was built from green (unseasoned) oak and in it we saw panels infilled with lath, woven strips of wood and plaster. They made good coffee there too!

Leominster’s magnificent 13th century church was originally part of a medieval Benedictine priory. Although the priory is no longer, as a victim of Henry V111’s dissolution of the monasteries, the monastic church still survives.

In the church we saw the last ducking stool used in England. This was a form of punishment used for wives whose husbands felt they were too opinionated. Another use of the ducking stool was to test for witches. If the poor suspect died she was thought to be innocent, but if she survived the ducking, then obviously, the devil had saved her. She was then executed 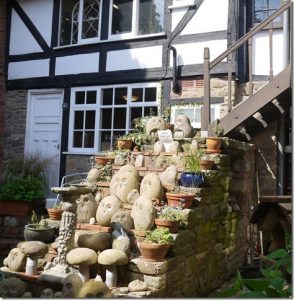 Pembridge had some wonderful timber framed buildings along its main street. Our knowledgeable local guide, Brian Draper, told us that the practice of decorating timber-framed houses by painting the beams black and the panels white, was a relatively recent one. This was to emphasise the pattern of the timber frame, and became common in Victorian times. Many houses prior to the eighteenth century were often left unpainted to weather naturally. Panels had lime wash applied, sometimes tinted with natural ingredients. Brian said that it was not uncommon for animal blood had been used for this purpose. It was a relief to see that the red panelled house we saw was nothing like the colour of blood!

There was a lunch stop at Kington, a Welsh boarder market town. It was near here that Sir Arthur Conan Doyle had his inspiration for ‘The Hound of the Baskervilles.’ Myth has it that a huge evil black dog caused havoc throughout the area. Even after its death locals were haunted by the dog’s spirit. Eventually the spirit was captured, put in a bottle, and thrown into a lake. If you find a bottle at the bottom of a lake do not open it or……

We drove through a number of delightful villages and had a stroll around Weobley, where Charles 1 stayed on the way back from the battle of Naseby in 1645. The spire of the fine church is a landmark for miles around. Our last stop was at the Monkland Cheese Dairy/Café where there was tea, cake and the opportunity to sample the various cheeses. The perfect end to a perfect day!

There was an extra large turnout for an evening with raconteur Henry Sandon MBE in St. Andrews Hall as he is well known to many of us considering Pershore his second home having held some workshops in this very building in 1976.

What is not always known is that he studied at the Guildhall of Music becoming a music teacher at the Royal Grammar School Worcester and a lay clerk in the Worcester Cathedral choir. This apparently, all changed after he found mediaeval and Roman pottery in his garden and became a “potaholic” in love with pottery and porcelain and being appointed curator of the Worcester Porcelain Company and the Dyson Perrins Museum at the Royal Worcester Factory in 1966 until 1982. His main claim to fame though is obviously presenting the Antiques Road Show, being voted in 2000 Antiques Personality of the Year (not because of his age!) and appointed MBE in 2008 for his services to broadcasting, the ceramics industry and charity.

He brought a collection of china and demonstrated how to use a teapot designed for Queen Victoria which is self pouring together with another one which is filled through a hole in the base as it has no lid – has to be seen to be believed!

Nonetheless, a very modest and entertaining man with a vast fund of knowledge and tales of his life ranging from being a strict schoolmaster to an expert ceramics valuer.

There are not many people who can stand for an hour and a half talking nonstop without a script and keeping their audience mesmerised.
Various items of china were passed around some featuring plum designs (of course, what else in Pershore) and of course, a replica of Ozzie the Owl.

I am sure that everyone would welcome a return visit by Henry some time in the future.

Back to Latest Diary Days >>>